​"As a versatile bassist who plays with folk, jazz, hip-hop, and rock musicians, Rye is someone who can create genuine newness. Being able to create beats, sing, play bass, and collaborate allows them to escape any boxes threatening to confine their music to genres." - Scapi Magazine

Lyn Rye is a Chicago bassist, singer, and composer who released their debut album, Roots of Rye, in January 2019. In addition to playing bass for rising Chicago stars such as queer country singer Andrew Sa and drummer-beatmaker Naydja Bruton, Rye has earned a reputation as an arresting songwriter and solo performer. Rye's sophomore album, Soft Blood, is a collection of story-songs written during the pandemic years that is due on September 9th, 2022. At times vulnerable and at times bombastic, Soft Blood demonstrates Rye's ability to guide listeners through rich, complex, and rewarding stories.

The title, Soft Blood, comes from an interaction between Rye and a friend. “I had just finished telling a particularly hard and painful story,” Rye recalls. “My friend turned to me and said, ‘The way that you can make a story like that beautiful…it’s like you have softness in your blood.’ I thought about that comment the whole time I was writing this album. I had all these hard stories that I wanted to tell - but I wanted to tell them my way.”

Rye has no shortage of material to draw from to spin a few yarns: in addition to music, their life is a dizzying patchwork of cultural work and collective organizing. In the five years since Rye re-located from Indiana to Chicago, they have been involved in prison abolition work in Chicago’s Muslim community, including collective organizing against migrant child detention and even an underground railroad for queer and trans Muslims fleeing their countries of origin. In 2021, Rye was one of a number of collaborators that founded Casa Al-Fatiha, an autonomous sanctuary house for LGBTQ+ asylum-seekers and people coming out of prison located on Chicago’s west side. Some of these experiences make an appearance on Soft Blood, such as the closing track “House of the Empty Chair,” a reflection on daily living at Casa Al-Fatiha. Or take Rye’s haunting anthem against the police, “Blueshift,” where the plaintive chorus of “All collide, all blue” hints at a different refrain also starting with A-C-A-B.  If the stories on Soft Blood are any indication, one gets the impression that Rye is rarely without an interesting tale to tell.

Some stories on the nine-track album are nail-biting and heart-breaking. Take the opening track, “Two Points Make A Line,” which was inspired by a photograph taken during massive flooding in April 2019 that affected much of the Midwest. The photograph was taken by a veteran who volunteered to drive a tractor through the floodwaters to deliver supplies to farmers who were blocked in (including Rye’s family). The photo stuck in Rye’s mind and resurfaced as a song in the depths of the pandemic. “Why do you turn your head? There’s nobody left here but you,” Rye muses in the song, equally rueful and determined, “But two points make a line, don’t they? Someone’s got to try.” Just as poignant is “Plum Wine In The Night,” a lush but vulnerable reflection on the difficulties of queer intimacy. “I wrote ‘Plum Wine’ inspired by a Lavender Country song called ‘I Can’t Shake The Stranger Out Of You.’ It’s one of the only songs I know of, country or otherwise, that explores the trouble that gay men sometimes have with finding real love. I wanted to write a lesbian equivalent. Queer love requires a lot of courage and we’re not immune to those same hang-ups.” Rye offers their musings in the song without providing easy resolution: “Round me to the nearest integer, I never ask for change,” they lament, “Now you cannot make cents of me, really who’s to blame?”

Rye’s striking stories are deftly guided through musical peaks and valleys by percussionist Tommy Carroll and guitarist Chet Zenor who also comprise the project’s live band. “One of the big goals of this album was to capture the sound of the band,” Rye reports. “I didn’t have a band when I made Roots of Rye. Three years later, me and Chet and Tommy have put so many miles on my van together, played so many shows together, and really made the music come alive.” The power trio of Rye, Carroll, and Zenor traverse dynamic, stylistic, and emotional ranges that bely their immense trust and experience as a group. Compare Carroll’s orchestral palette in “Plum Wine In The Night” to his raucous cajón solo in “Ten Ringer;” or perhaps compare the effortless bravado of Zenor’s guitar solo on “Easy” to the masterful layering on “Blueshift” which can only be described as the sound of grief channeled through a pedal board.

Rye and company will celebrate the release of “Soft Blood” on September 15th at The Hideout, a beloved staple of Chicago’s independent music scene. Living Thing, a longtime friend of Rye and fellow singer-bassist, will open the evening.

WHAT ABOUT CHICAGO? PODCAST 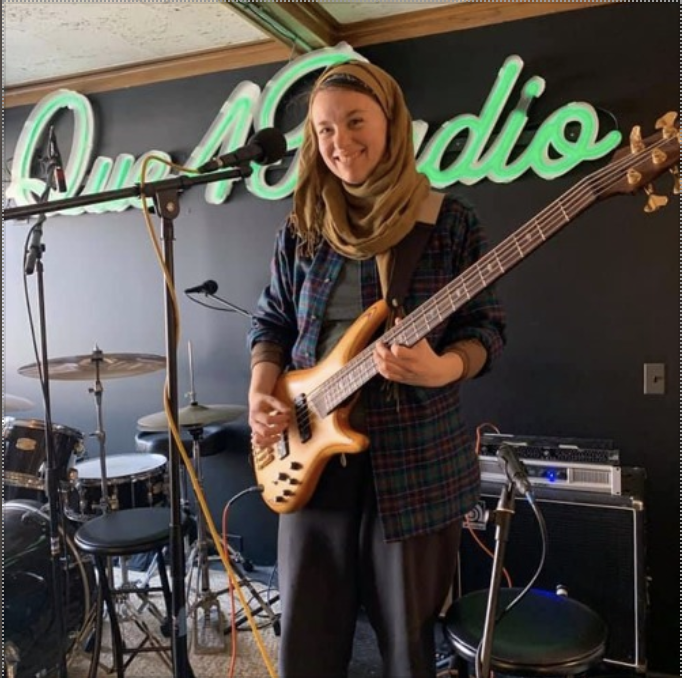 'On March 15, Scapi Magazine sat down with singer-bassist Lyn Rye to talk about experimenting with deadlines, collaborating with other artists, Chicago’s enthusiasm for blurring genres, and using the music in her heart for social justice. Rye’s released her new album, “Roots of Rye,” on January 28, 2019. The tracks resulted from an experiment Rye began in September 2018, where each week she produced a new song, along with a corresponding, one-minute video. She described her album as post-gender and post-genre, composed almost completely of bass, vocals, and Ableton. “I was not intending to make an album from these songs, I was just in my bedroom making songs, keeping myself honest with this schedule of once a week,” said Rye. “I didn’t have it in my mind as an album, so I really allowed myself to experiment with the genres, with beatmaking, with all these different sounds.”

Her lack of intention to create an album gave her a sense of freedom, as did the weekly time constraint. Usually, the planning process is intensive and detail-oriented, but having had only seven days to write and record each track saved her the extensive preparation. “I wanted to force myself to be really loose, and just giving myself a week to do each song was liberating,” said Rye.
Another goal behind the album was to learn how to record and make beats using Ableton. She figured using it for specific, tightly-deadlined projects would save her from falling into the vast information hole one might find themselves in while learning such a dynamic program....It seems that Rye was driven by the urge to take risks, to enter the unfamiliar and experiment with new processes. Prior to “Roots of Rye,” she understood beat making to be inaccessible. She thought that producing such music was out of her bassist realm and exclusive to the world of percussionists. But, Rye had been inspired by beat makers since teenhood, when Bjork’s “Vespertine” changed her world.

“I think I’m a very rhythmic person, but I’ve never been a percussionist,” said Rye. “It was so refreshing to feel like something that was inside of me was finally getting a voice through beat making.” As a versatile bassist who plays with folk, jazz, hip-hop, and rock musicians, Rye is someone who can create genuine newness. Being able to create beats, sing, play bass, and collaborate allowed her to escape any boxes threatening to confine her music to genres.'

Interview with MAGZ TV
"Boi Like Me" off of Roots of Rye featured on Maggy's Rooftop Aerial #175, February 2019